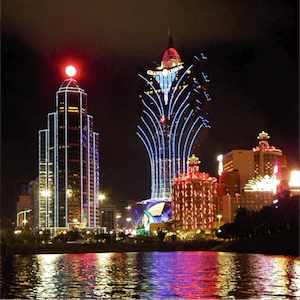 A new study by the International Monetary Fund, or IMF, the World Economic Outlook Update, has revealed that the new-kid-on-the-block in terms of casino and gambling capitals, Macau, is winning the long-term play as it prepares to take on the reins of the richest locale worldwide. By the year 2020, it is set to overtake Qatar as the richest location on earth.

3 countries in Europe, Ireland, Luxembourg, and Norway, made the IMF’s list of Top 10 Places Expected to Be the Wealthiest in the World by 2020, while the United States of America secured the No. 12 position.

Winning totals are set to reach US$143 116 per person in 2020, as per projections from the International Monetary Fund’s report. This will exceed Qatar’s current standing of US$139 151. Figures also reveal that the gap between Macau and Qatar will keep widening, as the former’s gross domestic product, or GDP, per-capita looks likely to approach US$172 681, while the former’s will only grow to US$158 117.

This is a meteoric rise for the ex-Portuguese colony located on the southernmost tip of China, who have only been independent for 20 years. Since it gained its new status, its gambling-hub standing for the Pan-Pacific region and beyond has seen the GDP more than triple since its total of US$34 500 per capita in 2001.

Putting the Numbers in Context

In terms of perspective, Singapore, Macau’s neighbour, will break into the six-figure zone by 2019, and reach US$117 535 by 2023. Hong Kong, another neighbour just across the water, looks to reach US$80 000 in the same time frame.

It is the only area of China in which casinos are legal, and so the role that Macau plays in terms of gambling is one that cannot be denied. Junkets from the mainland are becoming the norm, and serve to characterise the region as one in which a massive cash-turnover is the standard. There have been clear links to boosts to the economy from gambling in the form of entertainment like Games of Fortune, which generated an eye-watering US$32.68 billion for Macau.

The Per Capita Link is Missing

Thanks to the fact that gambling remains a primarily cash-based enterprise, it can be expected that the city will show a high turnover of liquidity. The extent to which this will translate to per-capita increases will have to be further established, however, as it is tied to how many people are working within the gambling industry itself.